While the recorder has been known since medieval times, it has never been more popular than now. It is perhaps the most widely produced instrument, along with the harmonica, and many of us have owned a recorder at some stage. Broadly speaking, recorders players are grouped as follows.

The recorder is particularly well suited to amateur players, where modest goals, joining with a large group of like players, or more ambitious ones, such as partnering skilled players of other instruments, are readily achievable. 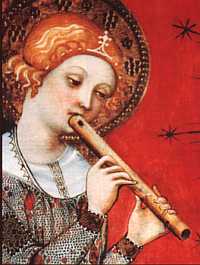 Several medieval age recorders have survived, as well as being depicted in contemporary images, such as this one by Pere Serra in 1390

During the renaissance, the recorder was a mainstream instrument. A quartet comprising bass, tenor and alto recorders was described in a book by Sebastian Virdung in 1511. King Henry VII's instrument collection was catalogued in 1547, after his death, and included 76 recorders. A key renaissance music focus was consorts of like instruments, e.g. recorders, viols, or voices. Great masters such a Byrd and Palestrina produced exquisite consort music, which adapts very well to recorder groups. 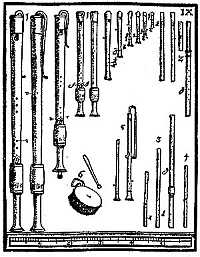 As the renaissance period ended and the early baroque began, Micheal Praetorius produced a three volume series "Syntagmum Musicum", which outlined the music of his age. Included was a 1620 woodcut, shown here, which outlined in detail the various recorder family instruments

Modern copies of these and other renaissance recorders are now widely available.

Towards the end of the 17th century, there was a greater emphasis on solo instruments in small chamber groups, a highlight being the Opus V solo violin sonatas published by Corelli in 1700 and widely adopted by recorder players since then. In France the Hotteterre family helped developed recorders which better matched a solo role than their renaissance counterparts. The baroque recorder, whose shape is the basis of most current day plastic recorders, had three sections, as opposed to two for the renaissance instruments. A thinner and more penetrating tone and wider note range were major characteristics of the baroque recorders.

Similar to the Stradavarius and Guaneri families in the violin world, the baroque recorder makers included star names, such as Bressan, Denner, Stanesby and Steenbergen. Most modern recorders are based on surviving examples of these classic 17th and 18th century instruments. However, unlike the great violins, the old recorders are rarely played, partly because moisture from the player's breath is potentially damaging.

The early years of the 18th century were the golden age for the solo recorder. Hnadel wrote great recorder masterpieces, likewise Vivaldi with his concerti. Bach wrote many wonderful recorder parts in his cantatas, as well as the incomparable twin recorder parts in the 4th Brandenburg Concerto. Sadly though, there were essentially no small recorder chamber pieces from Bach. This gap was filled by Telemann, the great 18th century composer and publishing entrepreneur, who produced large volumes of exquisite recorder music for all chamber group settings. Indeed, if you do not yet know Telemann, one of the great rewards of recorder playing is to discover his music.

By 1730, the transverse flute, a single keyed wooden forerunner to the modern flute, was taking the recorder's place. This was partly due to the greater dynamic range of the flute (the recorder pitch changes if played softy or very loudly). Also the transverse flute, being in "D", was better suited to the violin friendly keys of D and A than the alto recorder, whose natural key was F.

While the recorder did not entirely disappear, its role in 19th century music was minimal. A revived interest in early music in the 20th century led to a resurgence of the recorder, led by Arnold Dolmetsch (1858-1940) and his son Carl. In particular the Dolmetsch family developed large scale recorder manufacturing, joined by makers such as Mollenhauer and Moeck. Early editors such as F.S Giesberg in the 1930's brought high quality 17th and 18th century recorder music to light.

During the renaissance and baroque eras recorder players generally doubled on other instruments. However, during the modern era, from 1950 onwards, recorder virtuosi have emerged in their own right. Foremost amongst the early ones was Franz Bruggen, who also co-founded and still leads the Orchestra of the 18th Century. Other notable modern day recorder virtuosi include Dan Laurin, Michala Petri and Dorothee Oberlinger, along with many others.

A more complete history is at the Recorder Home Page.

An instrument for Mature Beginners

A key factor in the burgeoning modern popularity of the recorder is its accessibilty to mature beginning players. As mentioned, it has fewer technical challenges in the early stages than most other instruments, so that a new player can soon join a group of peers. While the first stages of recorder learning moves quickly, the latter stages offer similar challenges to other instruments. The leading recorder players have worked just as hard to develop their technique as other instrumentalists. Nonetheless, the recorder is a practical path to music making for those who, for whatever reason, have not yet experienced the joys and fellowship of combined musical endeavours.