The limited range of the recorder (two octaves and one note), compared to instruments like flute and violin, makes some recorder notes particularly important. For example, the note for this lesson, B flat, written as Bb. This note unlocks the keys of F major and D minor, both fundamental to the baroque recorder repertoire.

In simple terms, with this new note we can play baroque music previously denied to us. So here it is. B flat: 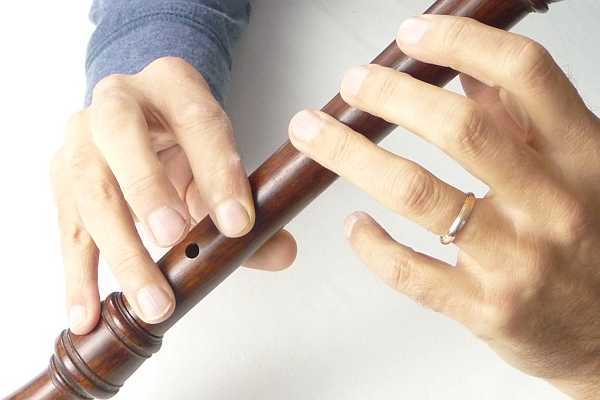 Try a B flat by itself, then try the exercise below:

When moving from the B flat to C (the first two notes), all the right hand fingers move together. The move from B flat to A (third bar) has R2 coming down while R3 and R4 come up. Try imagining R2 as a lever, which pushes R3 and R4 up together.

You may have noticed new notation, shown below:

This indicates that a B flat (or Bb) is played instead of a regular B, otherwise known as "B natural". This single "flat" sign in the key signature means the music is in the key of F (or D minor, as will be explained later). We can now play the F scale, up and down, also the F arpeggio. Both are shown below, try them with the backing.

You may still struggle with the Low F, with either too much breath pressure, or fingers landing incorrectly, or both. This note is elusive for beginners. One day you may have it, the next day you don't. The problem is usually too much breath pressure. Focus on a light but steady airstream, when the note comes observe what you have done right.

Now another time signature. Here each beat is a quarter note (crotchet), however there just are two beats per bar. The time signature is 2/4, the rhythm is sometimes called "cut time". A 2/4 music example is below. Recognise the tune?

With the F major scale finally under our belt, visit the library below and try some baroque era pieces.