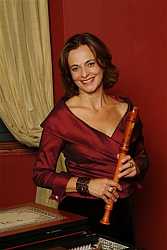 Based in Saint Paul MN, Cléa Galhano is a recorder teacher and performer who studied at the Faculdade Santa Marcelina in Brazil, the Royal Conservatory of The Hague in the Netherlands, and at the New England Conservatory of Music in Boston, earning a Fulbright scholarship. She has performed at the Boston Early Music Festival, the Tage Alter Music Festival in Germany, Wigmore Hall in London and gave her Carnegie Hall debut in 2010. She served for six years on the national board of the American Recorder Society

She instructs individual and ensembles and conducts workshops.